The Increased Importance of Coding Education in Today’s Digital World

Written by Faith Miller-Koren on August 16, 2021. Posted in Elementary, High-School.

Are you reading this blog on a digital device or computer? Did you drive anywhere today and pass a stop light? Maybe you had a recent doctor’s appointment and needed the use of a medical device? If the answer is “yes” to any of these questions, then you have been impacted by the technology filled world we are now living in. In this digital world, coding has become a basic literacy and it is crucial for kids and young people to be able to understand and work with the technology around it. After all, it will not become an invaluable skill anytime soon. 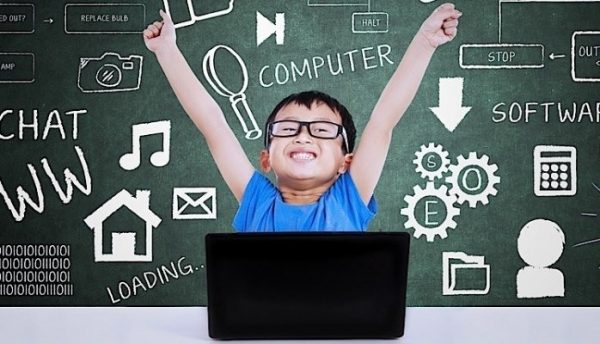 I am a third-year Biomedical Engineering student at the University of Guelph, and I have experienced first-hand the effects of coding education, or possibly the lack thereof, and understand why it is so essential that this topic is taught before college or university. Entering my first year of university, I had no prior knowledge of almost any basic coding skills. During this year, I was required to take my first ever computer science course: Introduction to Programming. With not much background knowledge, plus the pre-existing lack of confidence with being a first year student, this class became quite intimidating. Beyond that one course, I also had to complete a first year engineering design project, and as I’m sure you can guess, coding was needed for that too. See I told you it wasn’t going anywhere. Again, during this project, with little knowledge of coding and its applications, trying to program a mini robot became more than a challenge.

Despite the frustration and lack of understanding myself and so many other students feel, there is a solution that exists! Now more than ever, it is evident that coding concepts and applications need to be taught in school if we want our future engineers, web developers, computer programmers, and a huge portion of the next generation to succeed. Instead of teaching students a specific coding language, the greatest benefit we can give them is education on foundational coding concepts because this will provide them with diverse knowledge and transferable skills. When we talk about teaching coding to highschool or elementary students, we aren’t asking them to build an entire app, but instead to begin to understand basic coding topics. Some of these topics include algorithms, variables, functions, control elements and coding applications. The //code.Node from PASCO paired with Blockly Coding is the perfect answer we are looking for to fill this gap in coding education! 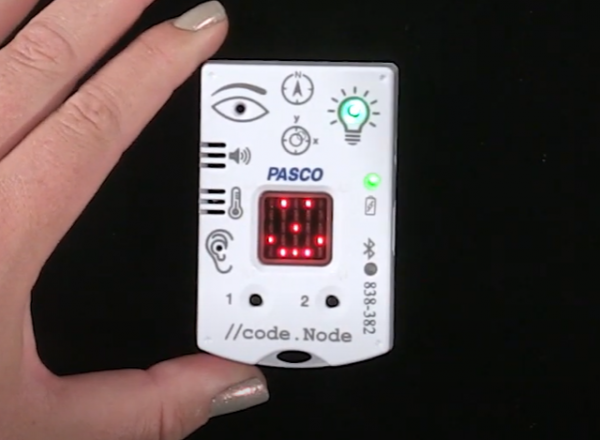 Blockly is a programming software, integrated within SPARKvue, that provides students with a visual method for developing strong coding foundations, without having to worry about their syntax. Students are able to simply drag and connect coloured coding blocks that correlate with correct coding elements to cover essential concepts, such as variables, commands and loops. To advance coding education even further, it is important for students to not only understand the basic concepts, but also learn about programming applications, including sensors and the code that controls them. The //code.Node and all PASCO Wireless Sensors can be used with Blockly coding, to bring these applications to life.

To put these tools to the test, I used Blockly and the Wireless Temperature Sensor to perform a lab activity from PASCO’s experiment library, where I developed a program to test the efficiency of two different light bulbs. 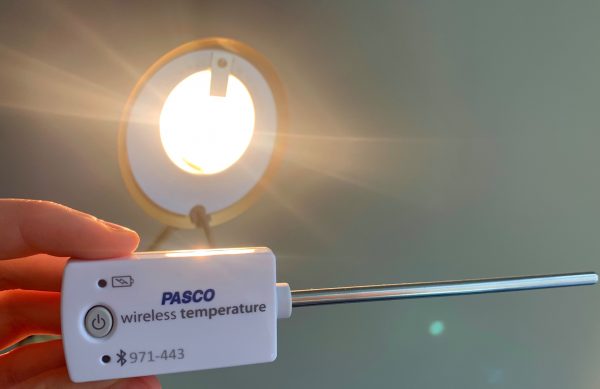 Constructing the code for this experiment was made very simple with Blockly. I was easily able to browse through the different elements, such as logic components, loops, variables and functions, and drag and connect them together as I was building. The goal of this program was to use the Temperature Sensor or //code.Node to determine the temperature of each light bulb. If the temperature was less than or equal to 27 degrees celsius, then the program output displayed “higher efficiency”. Furthermore, if the temperature was above 27 degrees celsius, the output for the bulb displayed “lower efficiency”. 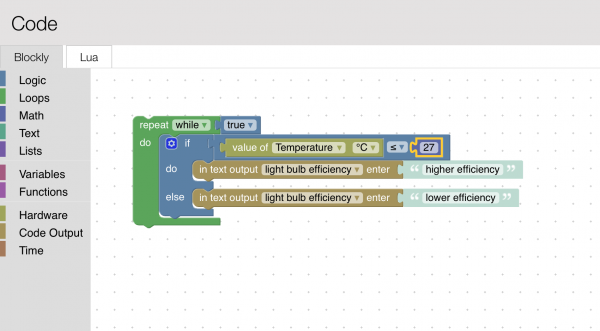 Just in this one simple exercise, I was able to learn about coding elements, such as while loops, if else statements, retrieving inputs, displaying outputs and more! Not only did I create a program, but I also had the opportunity to put my code to use with the PASCO Wireless Temperature Sensor, seeing a real-world application of programming.

Incorporating exercises like these, both simple ones and more advanced, is the easiest and most beneficial way to bring coding and its applications into the classroom. Whether that classroom is physics, chemistry, biology, environmental, computer science, or robotics, Blockly coding and the //code.Node are designed to fit in perfectly. Understanding computers and learning the basics of coding, has numerous other benefits for students as well, including developing problem solving skills and teaching them how to think. Computer programming isn’t just about teaching how to type lines of code. It is more about teaching how to think differently. Students will be able to use computational thinking, to see a large problem and break it down into smaller pieces in order to solve it in an effective manner. With tools such as the //code.Node and Blockly, there is no reason that coding cannot be implemented into our education. Together, let’s make sure that we set our students up for success in the technology driven future that we are entering.