Written by Craig Ecclestone on May 16, 2019. Posted in High-School, PASCO Champions, Post-Secondary.

It was the shot heard across Canada.  There were a lot of factors that made Kawhi’s buzzer beating basket so remarkable.  Aside from there being no time left on the clock and the weight of a sport’s nation on his shoulders, Kawhi had to overcome the backward momentum that is inherent in a ‘fadeaway’.  The purpose of a fadeway is to create space between the shooter and defender(s), which was a necessity for Kawhi as there were several seriously tall 76ers trying to screen his shot.

Over-coming the fadeway’s backwards momentum is no easy feat as it requires players to quickly calibrate in their minds the additional force that is required to successfully sink a basket, which for most mere mortals is not intuitive.  The shot is so challenging that only a handful of NBA basketball players have been able to reliably make this shot; and we’re talking the great players such as Michael Jordan, Lebron James, Kobe Bryant and of course Kawhi Leonard.

In addition to backwards momentum there were many additional physical factors at play such as the angle of the shot and gravity.  Investigating all these forces in a single activity would not be practical.  Fortunately most of these forces can be isolated and explored in the lab using PASCO sensors, software and/or equipment.

PASCO offers an intriguing and affordable solution to model the dramatic effect of a fadeaway’s negative momentum on projectile distance.  PASCO’s mini launcher will consistently launch projectile balls the same horizontal distance for a set angle, assuming that the launcher is stationary.  If however, the launcher is placed on PASCO’s frictionless cart, the force of pulling the trigger will cause the cart to move backwards at a velocity that can be measured using the motion sensor.  Students will be surprised to see that even though the cart travels just a few centimeters, the overall projectile distance is significantly reduced.  This can be a very simple demonstration or an in-depth quantitative analysis that factors in the projectiles initial angle and velocity, the time of flight and even the k-constant of the spring.

Other Forces Affecting a Basketball Shot

When a basketball player takes a jump shot (as with a fadeway), the player and the ball could be viewed as 2-object linear system if you ignore other outside forces such as gravity.  What’s interesting, and perhaps not apparent to many students, is that the basketball will exert an equivalent force to the player as the player is exerting on the basketball (Newton’s 3rd Law).  Of course because of the very significant inertia (mass) difference between the two objects, the basketball will accelerate at a much fast rate than the player.  The player however will experience some acceleration in the opposite direction to that of the basketball.

The Wireless Smart Carts are equipped with an exploding plunger.  Multiple 250g bars can be added to one cart to skew the masses.  The velocities of both carts are measured using the cart’s internal position sensors enabling students to determine that momentum is conserved in a linear exploding system.

The player’s force on the basketball will be equal to the opposing force of the basketball onto the player.  Of course most students will consider this a ridiculous proposition until they prove this for themselves.

There are several ways the carts can be used.  The simplest activity is for two students to have a tug-of-war using the internal force sensors of two Smart Carts and an elastic band as depicted in the image.  The equal but opposite forces will be confirmed, however in relation to a basketball player taking a shot, it has some shortcomings as the forces are pulling as oppose to pushing. 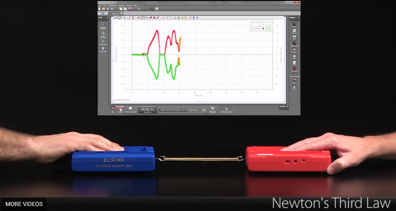 An equally simple activity, and one more relevant to the basketball shot scenario, is to collide two Smart Carts (with magnetic bumpers attached to their force sensors).  As both carts have equivalent masses, students may not be surprised to see the impact forces are identical.  However, what will probably surprise your students, are the force measurements that occur during a collision when one cart is weighed down with one or more 250g masses.  Using their intuition, most students will speculate that one of the carts will experience a much greater force than the other.  Of course, Newton’s 3rd Law will triumph and the forces will be identical. 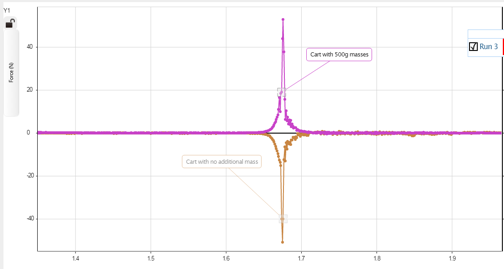 What goes up must come down.  This is true of course for all earth bound objects (including basketballs) due to the ever present force of gravity.  Without gravity the trajectory of a basketball player’s shot would be straight to the ceiling of the arena, where most of the fans would be viewing the game.

Exploring the accelerating force of gravity using the Motion sensor

PASCO offers several technologies and techniques for measuring gravity including the Wireless Smart Gate and Picket Fence and the new Freefall apparatus.  Both of these techniques are accurate and precise means to measure gravity.  A third technique and one more appropriate for relating to a basketball shot is to measure the position of a vertically tossed ball and then have the software derive an acceleration graph from this data.  Statistics, including the Mean of the acceleration plot can be calculated by the software for the period when the ball was in freefall as shown in the graph.